There is a general misconception that discrimination is unfair, however, this is not the case.

Discrimination is defined as differentiating between two or more people and/or groups based on an arbitrary or listed ground. A listed ground refers to race, gender, sexual orientation, etc., whereas an arbitrary ground refers to grounds that still amounts to unfair discrimination, but which is not listed in Section 6 of the Employment Equity Act (hereinafter referred to as “the Act”). An example of an arbitrary ground would be an employer who only employs first born individuals because that employer perceives them to be stronger leaders.

Discrimination is seen as unfair unless it can be justified on the grounds an inherent job requirement or implementing affirmative action measures consistent with the purpose of the Act. If, for example, an employer prefers an able body person over a disabled person, solely on the fact that the one is disabled, it would be seen as unfair discrimination. If, however, the employer can justify reasons for the before mentioned decision, it would not be seen as unfair discrimination. Let’s say the before mentioned scenario was applicable to the position of a truck driver, which requires one to have the use of both arms. In this case, the disabled person is classified as disabled because he/she has no arms. The employer is discriminating on the ground of disability; however, it would not be seen as unfair as it can be justified in terms of the job requirements.

The Act defines an Affirmative Action measure in Section 15(1) as a measure designed to ensure that suitably qualified people from designated groups, which refers to African, Coloured’s, Indians, women and people with disabilities, have equal employment opportunities and are equitably represented in all occupational levels in the workforce of a designated employer. In layman’s terms, this refers to measures that will eliminate unfair discrimination or barriers in company policies and procedures. An example of an Affirmative Action might be renovating an office block to make it wheelchair friendly. Another example of an Affirmative Action might be to implement a policy which would give preference to the training of people from designated groups.

It is, however, important to take note of Section 15(4) where it states that nothing requires an employer to implement policies or practices that would create an absolute barrier for people who are not from designated groups. For example, one cannot implement a Training Policy which states that only designated groups will be trained, as this creates a barrier towards any individual not meeting the before-mentioned criteria. Another example might be to only invite designated groups to an interview for a certain position. This would create a barrier for an individual from a non-designated group to enter employment. In some instances, this might also be seen as unfair discrimination on the grounds of race and gender depending on the scenario.

As per Section 11 of the Act, if unfair discrimination is alleged on a listed ground the employer against whom the allegation is made must prove that such discrimination, on a balance of probabilities:

Furthermore, the burden of proof of discrimination alleged on an arbitrary ground, the complainant must prove, on a balance of probabilities:

Designated employers, who refers to employers who employ 50 or more employees, employers who employ less than 50 employees but has an annual turnover equal or above that of a small business as stated in Schedule 4 of the Act, Municipalities, Organs of State and employers bound by collective agreement, must conduct a barriers analysis and include the identified affirmative action measures in their Employment Equity Plan. Non-designated employers are encouraged to do the same in order to eliminate any unfair discrimination in any existing policy or practice.

In conclusion, one can, in fact, discriminate, however only if it can be justified on an inherent requirement of the job or implementing affirmative action measures.

PrevPreviousCorrection: Commencement of Parental Leave
NextCancellation of Registration of the South African Fastener Manufacturers Association as an EmployersNext 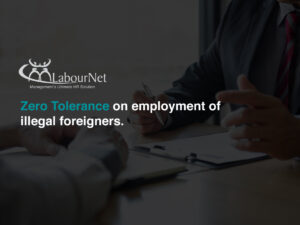 Ben Makhalemele, deputy director of corporate accounts at the Department of Home Affairs, has announced that South Africa is adopting a zero-tolerance policy on any illegal foreign workers hired in Do you know what the different qualifying contribution types are for Socio-economic Development?

Firstly, for Socio-economic Development, monetary or non-monetary contributions can be made HOWEVER these contributions, must: Be made with the objective to facilitate income generating activities whereby it promotes the sustainable