On 6 August 2018 the collective agreement concluded in the Bargaining Council for the Restaurant, Catering and Allied Trades was extended to non-parties in terms of section 31 of the Labour Relations Act by the Minister of Labour. This agreement is now binding on all employers and employees in the Restaurant and Catering industry, whether or not they belong to the Bargaining Council, or any Employer’s Organisation or Union listed in the Collective Agreement, until 31 May 2023.

The wage increases applicable are as follows: 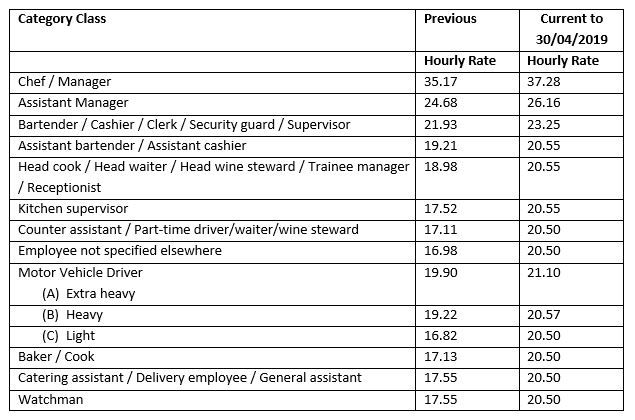 A small employer or his employee may be exempted from the prescribed minimum wages where they can satisfy the Council that any provisions of the agreement restrict entrepreneurial initiative or employment opportunities, upon applying to the Council for exemption in terms of section 29 of the collective agreement.

Employees on probation may earn 10% less that the prescribed wage for a period not exceeding three months.

A Part-time employee must be paid in respect of the ordinary hours of work, not less than the wage for an employee of the same class as the one in which he is employed.

Waiters may work on the basis of commission only, which rate of commission must be agreed upon between the parties in writing, and which will be paid out at the end of the shift/week/month. Where the commission-worker does not earn an amount equivalent to at least the prescribed minimum wage for waiters during the period of calculation, excluding any gratuity or tips, the owner shall pay the commission worker not less than the applicable minimum wage as prescribed for waiters for the hours that the commission worker worked. Commission workers must also receive a funeral benefit, with both parties contributing in equal portions to the monthly contribution in the amount of R12-50 each as per clause 21(B) of the collective agreement.

The prescribed minimum wages for special function casual employees are as follows:

Where special-function casual employee is required to work for less than five hours on any day, he shall be deemed to have worked for five hours.

An employer who requires a full time employee, other than a commission worker, a casual employee, and a special function casual employee to perform night work, shall pay such an employee an amount of R0.88 per hour, as a shift allowance, in addition to the employee’s salary for the hours worked between 18:00 and 06:00 or grant the employee at least 10 minutes time off on full pay for every hour worked at the end of each week.

An employer, other than a small employer, shall pay an employee other than a part -time, casual, special- function and commission workers the following as an annual bonus, payable during December:

(i) Three weeks’ wages for three years of completed service;

A small employer shall pay an employee other than part-time, casual, special function and commission workers the following as an annual bonus payable during December: –

(i) one week’s wages for one year completed service;