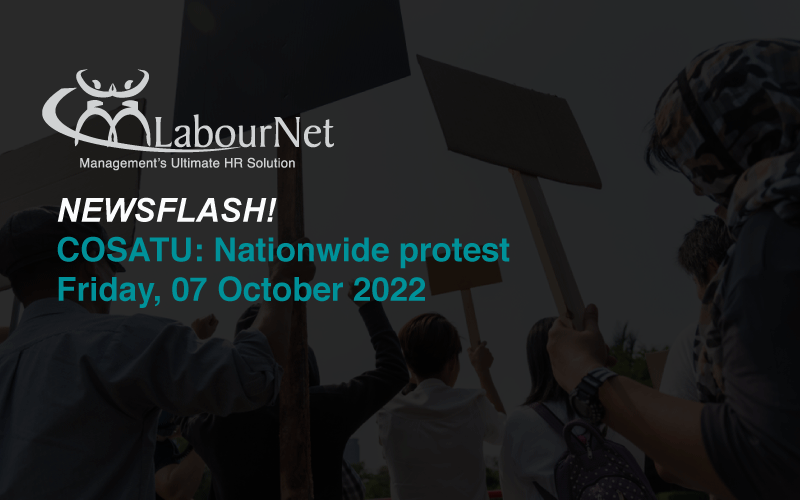 The Congress of South Africa trade unions will embark on a nationwide protest and other activities all across the country on Friday 7 October 2022 to mark the world day for decent work.

This is a section 77 protected national action that forms part of our international day of Decent Workday.

From its very founding the Federation committed itself to organise and unite workers based on improving their wages and raising their standard of living and making sure that they protect themselves from the insecurities of life.

Recently, the South African government finding itself incapable of dealing with this ongoing capitalist crisis has resorted to increasing austerity measures. This has seen cuts in public spending, leading to massive reduction in all aspects of social and economic benefits to the people, in wages, retirement benefits and pensions, health and education and social welfare transfers.

The federation has demanded that the government show that it is ready to abandon the ineffectual budget cuts and adopt a macro-economic framework geared to address the basic needs of the people, transform the economy, strengthen the public service, and renew efforts to build a capable developmental state in the upcoming Medium-Term Budget Policy Statement (MTBPS).

The Federation is encouraging all workers to participate in the planned activities and exercise their right to demand that employers and policymakers respect labour laws and take seriously the calls for decent work.

Below, as per the COSATU draft deployment list are some of the confirmed venues:

The rule of no-work-no-pay applies for workers who are taking the day off to join the protest action.

PrevPreviousExtension in processing of visa applications and outcomes on waiver applications in respect of foreign nationals.
NextAre you familiar with the basics of a B-BBEE VerificationNext